Supported versions of After Effects

It is also known to be working decently on all previous versions back to After Effects CC from 2013.

All versions before and including CS6 (2012 and before) will have issues running DuGR, and it will probably just not work at all, sorry! It’s time to update…

2 - Unzip the files you have downloaded.

3 - There are several ways to easily install DuGR:

a. Copy the files

Copy all the files from the ScriptUI Panels folder to:

You may need administrator privileges to install Duik this way. If you don’t have them, see the other ways below.

b. Using the menu for After Effects CC2019 and more recent

c. Shortcut for After Effects CC2018 and more recent

4 - Restart After Effects and DuGR will be available in the “Window” menu.

You’ll always be able to run DuGR without even installing it. This is a good way to use it if you do not have administrator privileges on an older version of After Effects.

On first run, DuGR may first ask for file and network access, this is mandatory to make it work (DuGR needs to write its icon files, effects, settings, etc.). 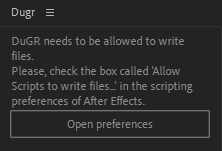 Click on Open Preferences to go to the scripting preferences of After Effects and check the “Authorize file and network access” checkbox.

Then, DuGR will ask for the language you wish to use; it is set on Esperanto by default, but many other languages are available.

Click on “Apliki” to apply the language you’ve chosen.

It can still be changed later in the settings panel.

From here you can search these documents. Enter your search terms below.